I’m feeling thankful that the savings and loan groups are going well. The title means, “What news of the group?”, a question I’ve asked a lot lately. I was a little worried that the group at Igombe UMC wouldn’t get off the ground, as the pastor there, Pastor Zakaria lives and works in a village over an hour away. It has indeed started though and seems to be going well, courtesy of their dedicated church secretary, Dunia (pictured below, preparing the structure for worship on Sunday). They meet each Sunday, and each member saves 1000 shillings (fifty cents) per week.

Pastor Zakaria, in red, to the right. The others are also members of the group.

Dunia assembles this structure each Sunday for the church to meet. 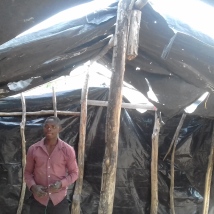 Last Friday, the 4th,  I was pretty excited to learn that the group at Lumala UMC has exceeded the twenty-five member limit and split into two twenty member groups, because so many people from the community wanted to join. Here is Steven Baruani, the secretary of the second group, with the notebooks that he will use to ensure that they keep good records. 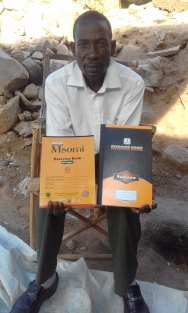 I was thankful to see the notebooks, as the main weakness of these groups is their tendency to collapse into quarrelling if they aren’t managed well. At Lumala UMC, the groups meet once a month and each member saves 5000 TZS ($2.50 USD). We would like them to meet more often and save smaller amounts so that poorer members of the community can have access to them, and we have been talking with the leaders about this, trying to get them to make the transition.

I was a pretty disappointed to learn that Nyegezi UMC had not started their group, until the pastor explained why. They have started constructing their church meeting house on their own initiative, and the members are contributing 1000 TZS a week to the construction, which is the amount that they would otherwise be saving. He assured me that they would start their group as soon as the construction was finished. On the left is Pastor Augustino, and on the right, their church building.

Finally, I visited Pasiasi UMC this morning, and the pastor told me they have also started their group, saving 1000 TZS (fifty cents) each week. When we were talking about the group before the service, I accidentally gave the impression that I would make a large contribution to the group so that it could begin loaning. I did not realize this until the pastor announced it to the church after the service, after which I had to apologize and tell the church that was incorrect. The way microfinance groups behave differs greatly from place to place, so I doubt that this is true in all places, but in Tanzania, outside funds tend to hurt, rather than help. The groups stop trying as hard to make sure that the loans are repaid, since it isn’t their money. In spite of this misunderstanding, and the fact that the pastor’s father, Jeremia, is very sick, the group seems to be going well. Here are some of the church members after worship; Pastor John Jeremia is in white on the left.

After twelve months have passed from the day each group started, the savings will be divided back up among the group members to give them a lump sum to make some major life-improving investment.

One thought on “Habari za Kikundi?”