Recently I visited my friend Asteria, who has benefited from Pamoja savings and loan groups and has also helped to start such groups. Since several of the churches we work with here have recently started Pamoja groups, I wanted to hear her story and see what these groups look like in the long-run (the title means, “Asteria’s story”). Here she is, doing someone’s hair:

My Kenyan friend Zach came with me and wrote up the following document of our conversation: asterias-story. (The rest of this blog is my summary of it.)

Before the group, Asteria had a small hairdressing salon, consisting of a chair and a desk, where she sat in the chair and did women’s hair as they sat on the floor. She still has this business, as pictured above, which brings in between $15 and $25 each month.

A pastor, Rev. Henry Kanyumi, who has also been helping us with our training, and his friend Dr. Maganga did Pamoja training at their church. They quickly recognized Asteria’s leadership ability, and appointed her to help start a group. She found sixty people who were interested, many right there in the market where she had her business. This was enough members for three groups, so they started the first two groups on November 12, 2014, and a third a few days later.

For the first three months, the members would meet each week and save together, an amount between .50 and $2.50 per week per member. After three months, this had grown enough that they could loan to the members at interest rates which each group set for itself. After nine months of loaning (one year from the group’s beginning) the money was divided and each member received what they had saved in addition to interest from the loans.

After the year was over and the lump sum returned, Asteria was able to buy a sewing machine and fabric, in order to add a sewing business to her hairdressing business (pictured below). We were interested to learn that she waited until the sum was divided to invest, rather than taking out a loan from the group. She said that while group members do benefit from the loans, much more of the benefit comes from the investments that members make with the money returned at the end of the cycle.

She also began constructing a larger house, which is now nearly finished, and replaced her jiko, the typical Tanzanian cook stove, with a small gas cooking stove. 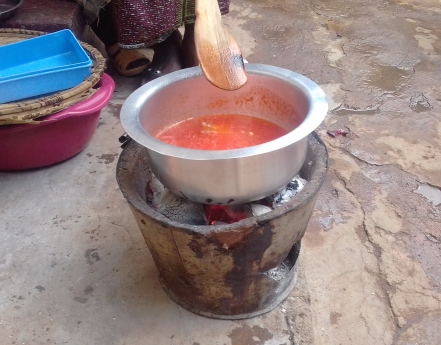 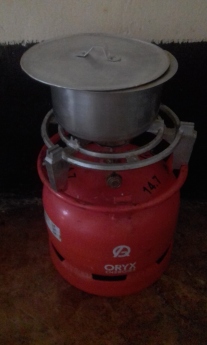 Zach and I estimated that she now makes at least $130 each month. Asteria told us that switching to the gas stove was an investment made by almost all group members after the cycle. This saves money, as gas costs less than charcoal, and it saves about an hour a day of cooking time. They also inhale much less smoke with the gas stove, which is a long-term health hazard for women who consistently cook with charcoal.

At the end of our visit, Asteria showed us many other shops that had benefited from Pamoja. There were too many to keep track of, but I counted at least five selling vegetables and fruits, five selling fish, four sewing/fabric shops, two selling shoes, one selling farm chemicals, and one M-Pesa shop. After seeing the Pamoja method in action, I am feeling optimistic about our fledgling Pamoja groups.

4 thoughts on “Hadithi ya Asteria”